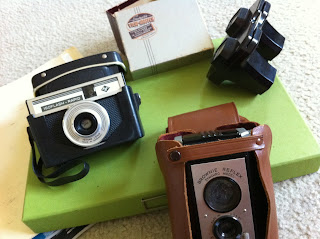 A couple weeks ago I swung by the swap meet again, and I've got a few new friends.  On the left is an Agfa kinda-thirty-five-mm camera -- which seems to take 35 mm film, but how it's taken up on the other spool (which is actually a cartridge) is unclear.  On the bottom is a Brownie Reflex -- which I thought took 120 film (not the first time I've made the custom-Kodak-size-film side-quest) but actually takes 127 film.  And finally there's a classic Sawyer's View Master -- which promises "third dimension pictures in full color kodachrome."  We truly live in the space age.

Time for another obscure-film-size rabbit hole!
Posted by Gabe at 3:46 PM