This is the most interesting hotel key you've never seen.  It's space-age, and hails from a time where tossing plastic in a landfill involved no thought for the future.  One word.  Are you listening Benjamin?  Plastics.

Flawless security!  And it's from the future!  So let's see if I can copy one.

Looking over a patent for a device that can detect the pin configuration currently configured, it appears that the key, when inserted, selectively pushes up some ball bearings allowing a plate to move freely.  That's about all I can figure out.  So, is it the holes, or the lack of holes that's important?  Maybe it's both. 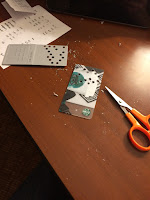 Well, gift cards are only a little thinner than this thing, and I can cut one down to the right width.  So I "borrow" an empty gift card from a local purveyor of coffee.  Drop the key on top of it, trace the outline and holes with a sharpie, and take a pair of small, pointy scissors to it.

Nope.  Looks like at the very least, the not-holes are significant.

Fine.  Be that way.  But, I live in the future, too.  I put a request for bids up on People Per Hour, including pictures of the card, and ask what a professional will charge me to send a ready-to-print 3D representation of it.  The answer?  $120.  And that's only because the person had a one-hour minimum.

A day later, and I've got the file in-hand.  Upload to thingiverse, enter my credit card, pick a swanky color.  And a couple days later it arrives. 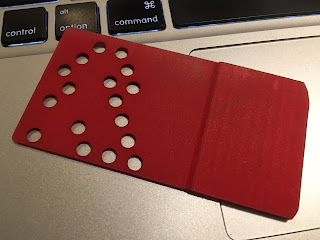 So far I've only seen this sort of key once.  It was a building that used to be a hotel, and then I think it became a residential hotel, and now it's mostly apartments with art school students packed in, two per two-hundred square foot efficiency unit.

Not cheap, to copy those things.  But for an art student who's perpetually losing their key, it could come in handy.  The building charges fifty dollars each, to replace these antiques.  And they can't help you at four AM, when you realize you lost it.  Having a spare on-hand might be worth it.