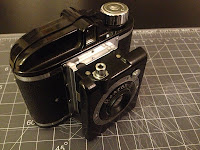 This is the Whitehouse Beacon II.  I'd never even heard of the Whitehouse company, but it was President's Day, so I had to get it.  Manufacturing spanned 1947 to 1955 -- that's Truman and a little Eisenhower.

It's got a fixed aperture of f/11, and the shutter is something like 1/50 of a second.  This is the early model, which includes a manual shutter option that was absent on the later versions.  (I blame Ike.)  I took it to Drink & Draw to shoot a roll of Rollei Crossbird slide film on it.  At ISO 200, the shutter times were around two seconds.  We'll see what happens!
Posted by Gabe at 1:03 PM No comments: 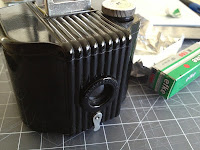 I picked up this little Kodak Baby Brownie last week.  It came in a pair, with a Baby Brownie Special.  I'm trying the "non-Special" first.

The great copypaste feedback loop that is the Internet suggests it's got a fixed aperture of f/11.  And the shutter speed is "around" one fortieth of a second.  This is the domestic model, sold between 1934 and 1941.  An export model was created later, which offered a manual shutter mode.  (Sold in the UK between 1948 and 52.)

So in the current winter quarter, I'm taking a drawing class.  It's fantastic.  Now, I tend to ping-pong between tech and humanities, so tech "should" be next.  The only criteria are that it needs to be in the evening, and needs to be in an actual classroom so that I can block it out as a "meeting" in my calendar.  Here's the schizoid short-list:


Weird options, I know.  Flip a coin until I'm happy with the outcome, I suppose.
Posted by Gabe at 11:15 PM No comments:

Here's what I'll be chatting about, while enjoying a tasty beer with interesting people.
Remember to drink responsibly, when using/avoiding your Facebook apps.
Posted by Gabe at 12:33 PM No comments: 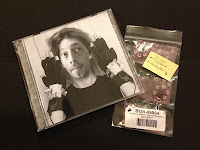 My friend Erica challenged me on my birthday.  She sent me three Lilypad pieces -- an RGB LED, an accelerometer, and an electret microphone.  The "challenge" part is that she packed them inside a CD jewel case .. with my face photoshopped onto Imogen Heap showing off her gloves.

I've already got an old mainboard, and a bunch of conductive thread.  I picked up a cheap pair of fabric gloves while I was running an errand on Friday.  I'm going to sew this stuff together and see what it might like to be when it grows up.
Posted by Gabe at 7:02 PM No comments: