W00! This is a test of the "angel hair" 1.2mm EL wire. I picked up a few short lengths of a few colors. This one's the "blue-green." I just ordered a bunch more, so I can try tacking it to my little-used lighter-weight motorcycle jacket. TRON Halloween, anyone?
Posted by Gabe at 11:32 PM No comments:

The internet is abuzz about Haystack Network.  Their product was a network anonymizing system that promised to undetectably pierce Great Firewalls, and obfuscate the location of internet-connected dissidents.  Haystack's abilities were trumpeted as a victory for free speech -- and since the buzz coincided with Iran blocking internet sites during its elections, it enjoyed bi-partisan praise from both John McCain (R) and Hillary Clinton (D).

It turned out to be snakeoil.  Like its metaphorical counterpart, Haystack contained inneffective ingredients at best, and poison at worst.  Not only did it fail to leap firewalls or protect the location of users, it announced itself on the network and was easily hijacked!  (It also does not cure bilious humors.  Don't ask how I know.)

The problem with snakeoil is the "secret ingredients."  Haystack refused to tell anyone how the app worked its magic -- claiming that to do so would allow attackers to foil it.  This is "security through obscurity" and it should give you the heebies.  Cypherpunks cite Kerckhoffs' principle and tell you that a truly secure system remains secure even after the enemy figures out how it works.  Otherwise, you're only buying time.

So here's my thought.  This tale runs directly parallel to that of electronic voting systems.  Yes, we're excited to have a system that avoids dangling chads and ballot stuffing.  And we're told that the systems we're buying are secure.  But we're told that if the general public knew how they work, they'd be instantly prone to foul play.[needs citation]  "Cures what ails ya?"  Shenanigans!  And research suggests the same.

Haystack Network's vaporware was celebrated on both sides of the aisle -- so backlash and embarrassment should be bi-partisan as well, right?  (Or swept under the rug twice as fast.) Can we take the momentum from this lesson learned and apply it to the electronic voting systems that are being peddled to us?  These things need to be secured, publicly proven, beat up and disassembled -- even if it's not cost effective for the suppliers.  Let's demand it!

Also, tin-foil hats for everyone.
Posted by Gabe at 9:36 PM No comments:

My Most Obscure Ping Artist : The Mynabirds 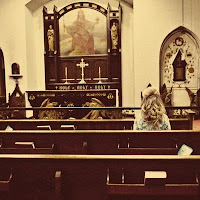 Setting up my Ping profile in iTunes, it was interesting to see how many followers each suggested artist currently had.  The most obscure of the artists I followed?  The Mynabirds.  In the interest of share-a-like (so to speak) here's their homepage, their info at Pandora, and a link to them in iTunes.  So, who's your least-followed artist?
Posted by Gabe at 1:00 PM No comments:

Email ThisBlogThis!Share to TwitterShare to FacebookShare to Pinterest
Labels: else

Sometimes a product manager says "hey, why not?" and you don't have a good answer.  So you implement it.

I just kicked off an install of the beta of Ubuntu 10.10 Marvelous Merkin on my netbook and it does some things in parallel that totally make sense, but you never thought of it.  It starts partitioning your drive and copying files *before* it asks your timezone and keyboard layout -- it asks those configuration bits *while* mucking with your disks.  "Why not?"  Oh, did I mention, I'm writing this post on my netbook while Ubuntu is installing in the background?  This is a really subtle, but really kewl difference between this and other OS installs.  A focus on making your computer useful ...  even while you're installing a whole operating system.  I like it!
Posted by Gabe at 11:15 PM No comments:

Email ThisBlogThis!Share to TwitterShare to FacebookShare to Pinterest
Labels: ubuntu

Pinout of a PCB-mounted USB "B" Receptacle 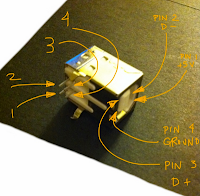 Step one of making an Arduino impersonate other USB devices is to wire-up a USB "B" receptacle so you can attach it to the Arduino's 5V, Ground, and three digital outputs.  Finding the pinout of the receptacle is easy -- but I had to get out the multimeter to discover how that passes through to the bottom side of the thing.  I *think* I've got it...
Posted by Gabe at 12:11 PM No comments: