When your Purchases have Memory

So I was reading an article on flexible graphine memristors, which are a non-volatile data storage device.  And I was thinking about how most modern electronics actually are washable -- as long as they don't have power attached.  And so I thought, what if you put flexible memory devices in clothing, they'd be just like any other tag on it.  And then I thought okay, what if I add a radio antenna and attach it to a microprocessor that's small enough the radio waves alone are enough to power it.

Now you've got a bit of data-storage that you can attach to every item in a store, that can be read and writen at a distance over RF.  And it's flexible, so it can stay attached for the life of the product without bothering your customer.

Kewl huh?  Imagine walking into a clothing store and they know exactly how much you paid for each item you're wearing.  Did you pay full price?  Did you buy each item by itself, or as an outfit?  How long after the new products came out, before you purchased them?

What if other retailers "bomb" the tags of their competitors, so that after you've visited a Levi's store, your Lucky Jeans start lying, saying you bought them at a total loss to the retailer .. and months after they came out?  What if you rewrite your own tags, to get better service, by setting off the "pays full price, buys multiple  items at once, adopts early" flags in a target retailer's scanners?  And that's just clothing.  I can't wait to mess with more ubiquitous computing.
Posted by Gabe at 12:24 PM No comments:

Email ThisBlogThis!Share to TwitterShare to FacebookShare to Pinterest
Labels: futures

I need a book that teaches tech people how to communicate in professional settings.  We know how to talk to each other, but when we're out in the wild we could use some help.  This book would provide multiple "zoom levels" of content, so for each subject I could read a thirty-second treatment, a five minute overview, or a thirty minute in-depth analysis.

Here are a few sample subjects:

Can someone please write this?  KTHX  BAI
Posted by Gabe at 12:28 PM No comments:

It's fun to think I'm travelling into the future, implementing ambient notification and using ubiquitous/wearable computers.  But the fact of the matter is that ambient notification is very old.  The most obvious example is the cathedral bell tower that chimes every fifteen minutes and tolls on the hour.  I also like to think that skylights ambiently inform you of the time of day and outdoor weather without having to look at them.  What else?
Posted by Gabe at 11:56 AM 1 comment:

Email ThisBlogThis!Share to TwitterShare to FacebookShare to Pinterest
Labels: futures

We got new business cards at work, with better, more-descriptive titles. The layout looks unbalanced to me, tho, so I cut one up and balanced it. It's so easy to submit a digital print job to a professional bureau, these days, I wonder if I should just redo mine on my own...
Posted by Gabe at 11:45 AM No comments:

Email ThisBlogThis!Share to TwitterShare to FacebookShare to Pinterest
Labels: make

Got my Square card reader the other day. And last Friday I received my new, improved reader.  I've actually used it twice already, when someone owed me for lunch but only had a credit card.  (That's actually the creators' original use-case!)
Posted by Gabe at 5:55 PM No comments:

Here's what the kit looks like after a slightly-sloppy soldering job and with a couple pieces seated incorrectly. It works, tho!

Getting Started with Processing

I finally finished the Getting Started with Processing book. It's been the one I carry around for when I'm getting the oil changed, having lunch alone, or have a moment at the pub. Here's what my screen looked like after the penultimate chapter. 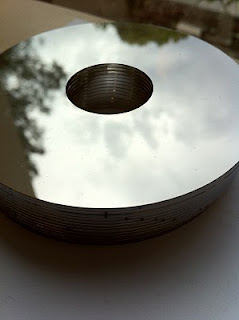 Being in my company's storage-admin group (among others) means I end up with plenty of dead hard drives to play with -- so I've been disassembling them.  It turns out the faster/better/iops-i-er ones have more physical platters in them.  A cheap SATA drive will often have just one, where the SAS and FC ones have five, or in some cases three.

I wanna make the loose platters into an art project.  I used to have a clock I made from an old 7" platter.  If I can figure out how to hack up the heads with a jig-saw, they'd make excellent clock hands.
Posted by Gabe at 9:06 PM No comments:

Diagram of Career and Washed-Up-Dreamer-ness 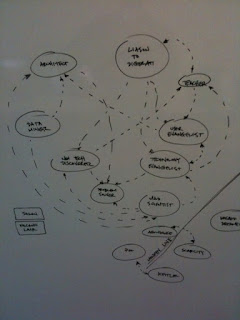 I was talking with my friend justkristin, the other day, and we were chatting about dream jobs, dream fame, and nightmares. Since there's nothing like a whiteboard to make your junk look official, we drew some stuff. Here's what we came up with.  I think it's important to note that "volcano lair" isn't just in the "want" column -- it's a "must have."
Posted by Gabe at 5:26 PM No comments:

I had the idea to fill some space by describing the various periodicals I receive and actually read. They're kinda odd, but peculiarly interesting to me. Well the draft "placeholder" post has been here for six months and they're not getting written. So let's clear the decks:

[x] Nature : Already talked about this one in this post.
[ ] Copeia : Yep, that's a society of Ichthyology and Herpetology.  Buy one, get one!
[ ] Fantastic Man : Because you never know when someone's suddenly gonna demand "vest or cummerbund?"
[ ] IEEE Oceanic Engineering : Kewl swimming robots, though lately they're mostly militarized.
[ ] Game Informer : It's not a job, it's a text adventure!
[ ] Make : Like the anarchist's cookbook ... except written by responsible adults.
Posted by Gabe at 5:14 PM No comments:

Email ThisBlogThis!Share to TwitterShare to FacebookShare to Pinterest
Labels: ecology

I've noticed that the clever sysadmins I'm friends with all seem to groove on motorcycles.  Even if they don't have one themselves, they think that in general they're pretty keen.  Why is that?

Well, you can replace the stock parts with all sorts of other parts -- just make sure you screw everything back on nice and snug!  And a particularly kewl arrangement of parts always leads others to comment "nice hack," or "nice bike."  Some folks shoot for the aesthetic, and other folks go for something that "just works," but either one seems to garner a little praise in its own category.  So there's that parallel.

Also, we're both always looking ahead for hazards .. almost pathalogically.  This is likely because no one sees you until the very last moment before they mess your stuff up.  You've got everything very nicely balanced, thanks, as long as you know ahead of time where the bumps are, and when you're going to have to turn.  In fact, we probably both swear in similar ways when something unexpected pops up in front of us.  That's a clear similarity.

Now the only thing we're missing is the "biker wave."  Which is a shame.  Or do I just not know what the "sysadmin wave" looks like?
Posted by Gabe at 5:27 PM No comments:

An IEEE newsletter pointed me at a great Harvard Business Review post by Whitney Johnson, that discusses the idea of a "disruptive skill."  Why and how do you beat the competition?  And why is it unique to you?  I'd like to be a cross-pollinator -- a modern day Doc Ricketts, Doc Brown, or Doctor Demento.  Sometimes your *weird* skills are the most valuable.
Posted by Gabe at 8:29 PM No comments:

Czech this out, it fits!  I like to get the matches that come in a little box, you see.  And then it occurred to me that my Adafruit TV-B-Gone Kit looked like it's about the same size.  And it is!  So the next time we're in a sports bar, and you see me take out a box of matches, prepare to see a bunch of TVs turn off magically.  :)
Posted by Gabe at 8:02 PM No comments:

I love the unified chat/broadcast/email bits that are integrated into the main menu bar of Ubuntu 10.10 Marvelous Merkin.  For some reason tho, the current Google Talk settings don't work right out of the box.  Here's what you have to do, once you've got the chat app running:

Fixing the Hibernate (&c) Problem on my Vaio running Ubuntu 10.10

Holy crap that was messed up.  I recently installed the alpha, then the beta, and now the release candidate of Ubuntu 10.10 Marvelous Merkin on my Sony Vaio M111AX.  Problem is, where my laptop could sleep, hibernate, restart and shutdown just fine under 10.04 Lucid, it was now just wedging with X mostly shut down but the desktop background still there ... taunting me.

It turns out the problem is in one of the the Ralink drivers.  And since this machine uses an Atheros for WIFI, I really don't need Ralink.

It's likely overkill, as the rt2800pci is the particular one that causes the problem on this particular model of Sony.  But I'll bet other laptops with similar problems will benefit from this more inclusive list.  (And `lsmod | grep rt` will tell you if you have others, in case this set doesn't do it.)


After you edit the file, tell your system to reboot.  On this last reboot just after editing the file, you'll wedge like usual, but the subsequent ones will blacklist the ra2800 drivers correctly, and reboots will work just fine.  Phew!