Setting up FTDI (for XBee) on Mac OS X

My awesome brother and I have been playing with XBee radios for the past few days.  Darned near all of the programming interfaces -- and fancier breakout boards -- use a USB-to-FTDI serial translator.  I've got a new Air here that doesn't have the drivers installed yet.  So, since it took a minute or two to determine what I needed, here's my quick outline for the next time: 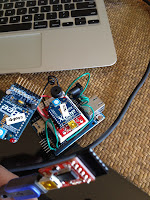 You don't actually need CoolTerm or ZTerm, if you don't mind that `screen` won't do a local echo.  If you're okay with typing blind, a `screen /dev/cu.usbserial*` command should work just fine (as long there's only one usbserial device connected at a time).  Crafting a one-liner that fakes local echo is left as an exercise for our new robotic overlords.
Posted by Gabe at 12:22 PM