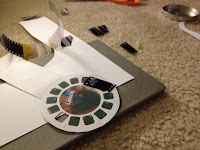 I shot another roll of slide film on the Viewmaster Mark II.  With the last roll, I hand-crafted some reels and chopped up the film in the process.  Briefly, what I did was scan an existing viewmaster reel, then print that on card stock.  I cut out frames on the cardstock reel with an exacto, then sliced up my film and taped it to the card.  This actually works surprisingly well.  Just slip it into a normal viewer carefully.

For this roll, I'm going to keep the film intact.  I'm pretty sure I can craft a viewer of my own that will let me slide the whole strip through it, with a mask that'll only show one pair at a time.  So instead of advancing the usual round disc to see frames, I'll slide the film one frame's width through the contraption.  It'll likely be totally hand-done, but if I get excited and try to 3D print it, I'll post the files for everyone to join in.
Posted by Gabe at 4:08 PM