A Weekend of Zipit Linux 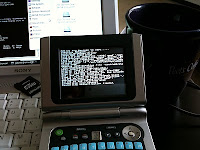 Okay, so I spent a bunch of time messing with linux on the Zipit Wireless Z2, and took so many notes I put them in a separate page.  Installing and booting into the manufacturer's shell environment wasn't too tricky.  Getting the wifi to talk WPA2 was sneaky, but simple.

Next, I traded up to the IZ2S version of the shell, which has lots more stuff in it.  I got a web server running on the little toy, then figured out how to ssh to it, then finally topped it all off by making a twitter account and having it tweet something.  Zooom!
Posted by Gabe at 8:37 PM