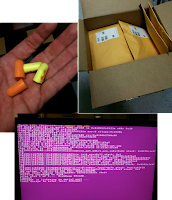 I can't hear you Bert, there's a banana in my ear.  Or a tangerine.  I've been racking and hypervising a render farm, so I ended up with both flavors of earplugs in my pocket on Thursday.  The orange 3M ones are seriously industrial grade -- it's a shame they pop out if you try to put a helmet on over them.

The render nodes' hardware didn't include power cables, so we added those to our order.  HP shipped us forty cables -- each one individually packed in a #5 Jiffypack envelope!  So now I've got forty envelopes, and included in each one is a pamphlet inviting me to visit HP's website for information on their environmental initiatives.  It's like a black fly in your chardonnay.

It's lucky that I had twice the earplugs, because I ended up installing twice the vmware.  You see, my nodes' hardware isn't "officially supported" for the HP-branded install, but I assumed that I wanted to install HP's branded version of ESXi on them anyway.  Not exactly.  It installs, and reboots alright, but after two minutes it bluescreens.  My first pass, I was just installing and confirming I could reboot, then shutting down each node -- so I installed all forty with the branded hypervisor.  When I went to add IP addressing later, they all ran long enough to bluescreen.  D'oh!

Everything works now, though!  I just need to come up with an art project that requires forty padded mailer envelopes.  Papercraft armor, perhaps?  With a plus ten enchantment against the purple screen of death, plz.
Posted by Gabe at 1:09 PM