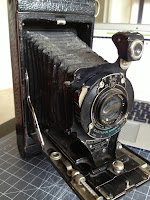 Say hello to the Kodak No.1-A Pocket camera.  The "A" in the model is for autographic, just like the Vest Pocket cameras have.  This wasn't a swap meet special -- I actually paid a few bucks.  Not enough to think it works at all, though.

In contrast to the point-and-shoot Kodaks like the Brownies, this one offers f-stops from 6.3 to 45.  It's got 1/25 and 1/50 shutter speeds, as well as a manual shutter.  Additionally, like the Vest Pocket cameras, it has a "timed" setting, where you click the shutter once to open, then click a second time to close it.

It takes 116-size film.  Luckily, it had a take-up spool in it.  I threw in a roll of 120-size Fujifilm Pro 400H, which is noticeably narrower than the 116, so it sat loose in there.  I had to guess on how far to roll the film to advance it one "frame."  I turned the advance knob eight 360° rotations between photos.  I got at least two shots on this roll.  If the thing isn't a complete light-leak-special, I'll be able to back-out how many rotations I actually need to advance a single frame of 120 film.

I might take a shot at 3d-printing a 116-size adapter that's specifically designed to kludge a 120-size film roll securely into place.   I've been meaning to try printing spools ever since chopping 120 spools down to 620.