Brownie Hawkeye in Black and White 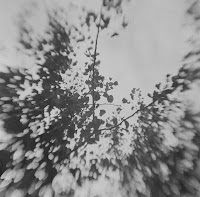 The Brownie Hawkeye *definitely* prefers black and white film.  This is my second roll on this camera, with the same film-loading technique of using hacked up 120 spools to fit in the 620 holder.  The film is Ilford XP2 Super, which I'm really getting a taste for, despite being raised on HP5.  My favorite lab does C-41, and sends everything else out ... so I'm keeping local, where they know to expect the toy/old camera zaniness.

That first color roll showed me what to expect from the wacky lens.  And it showed me that it's designed for simple snapshots, to record a get-together or an interesting place.  So I was trying to center subjects, expecting the blur, not trying to "compose" a shot.  But the black and white film just works *whey* better in this camera.  (Justkristin's mom scolded me for putting color in it.)  Serendipity.
Posted by Gabe at 10:11 PM