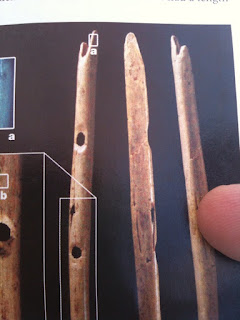 These are flutes, dug up in southwestern Germany, which I was reading about last weekend. They're more than thirty-five thousand years old. Thirty. Five. Thousand. That predates beer by five thousand years (in Europe at least, though not Sumer).
Thanks to Hollywood, we think of early descendants of apes banging on percussion instruments in their spare time, when not preoccupied with food and sex. We smacked bones against rocks, sticks against logs, then finally bumbled into skin stretched over tree trunks. It took Modern Science (tm) to make "real" music.
But what if we're so innately, tonally musical, that some of our first "survival" tools were sophisticated musical instruments?
Posted by Gabe at 11:07 AM

Email ThisBlogThis!Share to TwitterShare to FacebookShare to Pinterest
Labels: beer